Skip to content
As some of you know, I recently took a trip to Italy & France where I had the pleasure of eating some REAL French Macarons. It was such an enlightening experience because I had taught myself how to make them previously, yet I never really knew how they were supposed to taste. They. Were. Amazing.
Light and cakey, not too sweet, and balanced flavors. We visited a Pierre Herme bakery countertop to get these amazing sweets, and before we flew back home I had already purchased his book through Amazon so I could get to work right away.
Pierre Herme is a Rockstar in the pastry world. He’s a master of chocolate but also very well known for his uniquely flavored macarons.
After I returned home and started reading the book, I learned it wasn’t that far off with my technique, but my oven temp and time needed to be higher. You see, the only difference in my macarons shells previously were that my shells were usually always hollow. I was baking the shells on a lower temp for longer time thinking that would yield me with a tender shell. The second difference between mine and Pierre Hermes was the flavor. He doesn’t bother flavoring the shell, and believes all the flavor should come from the filling. And he typically uses ganache, where as I usually used buttercream. Buttercream tends to be sweeter and firmer than ganache, so the use of ganache over buttercream would allow the shells to soften up from the inside as well as a less sweet cookie.
So here is one of my favorite flavor combinations interpreted through macarons. The recipe for the macaron shells is one of the base recipe’s in Pierre Herme’s book. For those out there who would like to learn more about macarons, I HIGHLY recommend one of his several books on macarons. 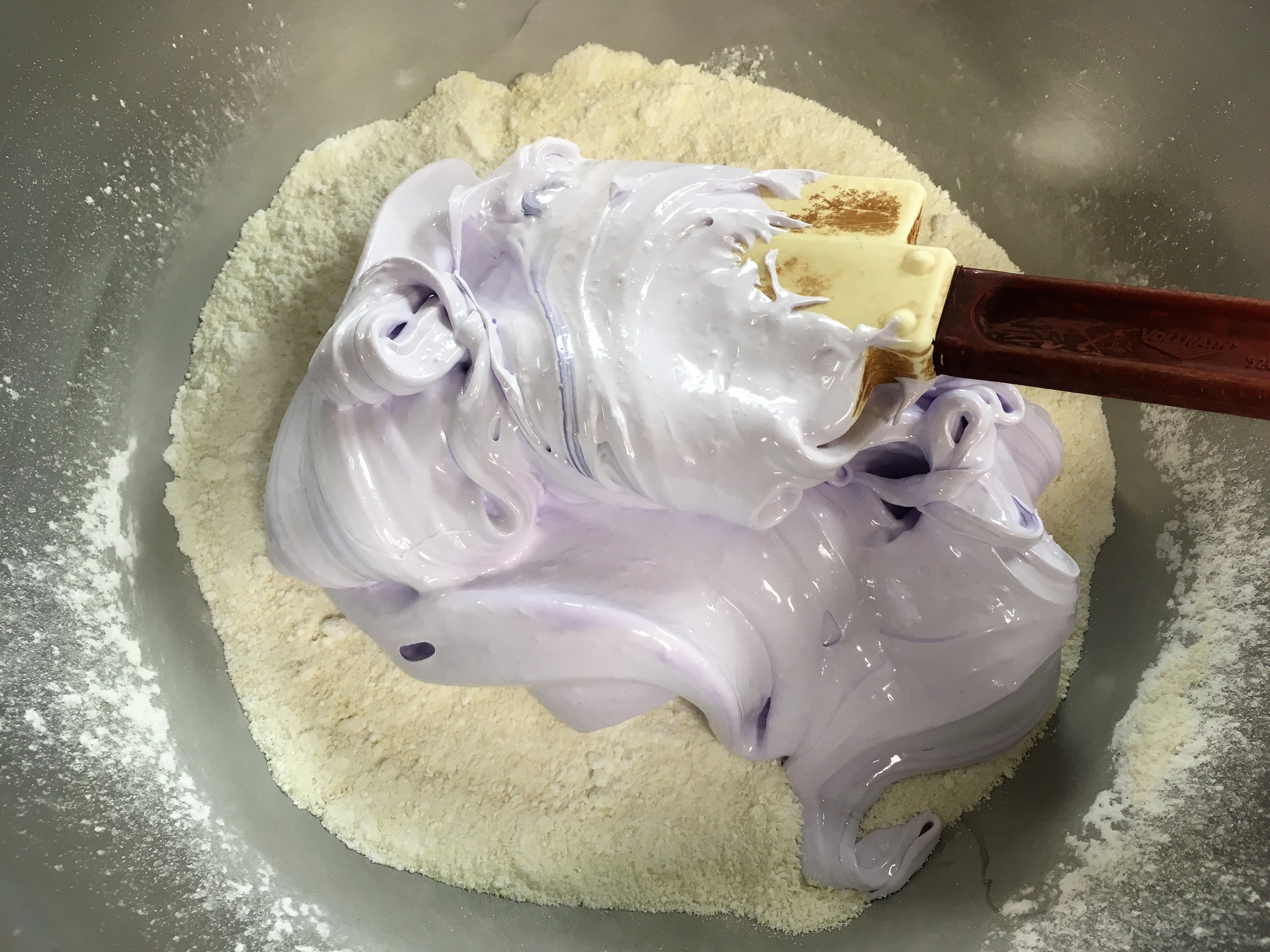 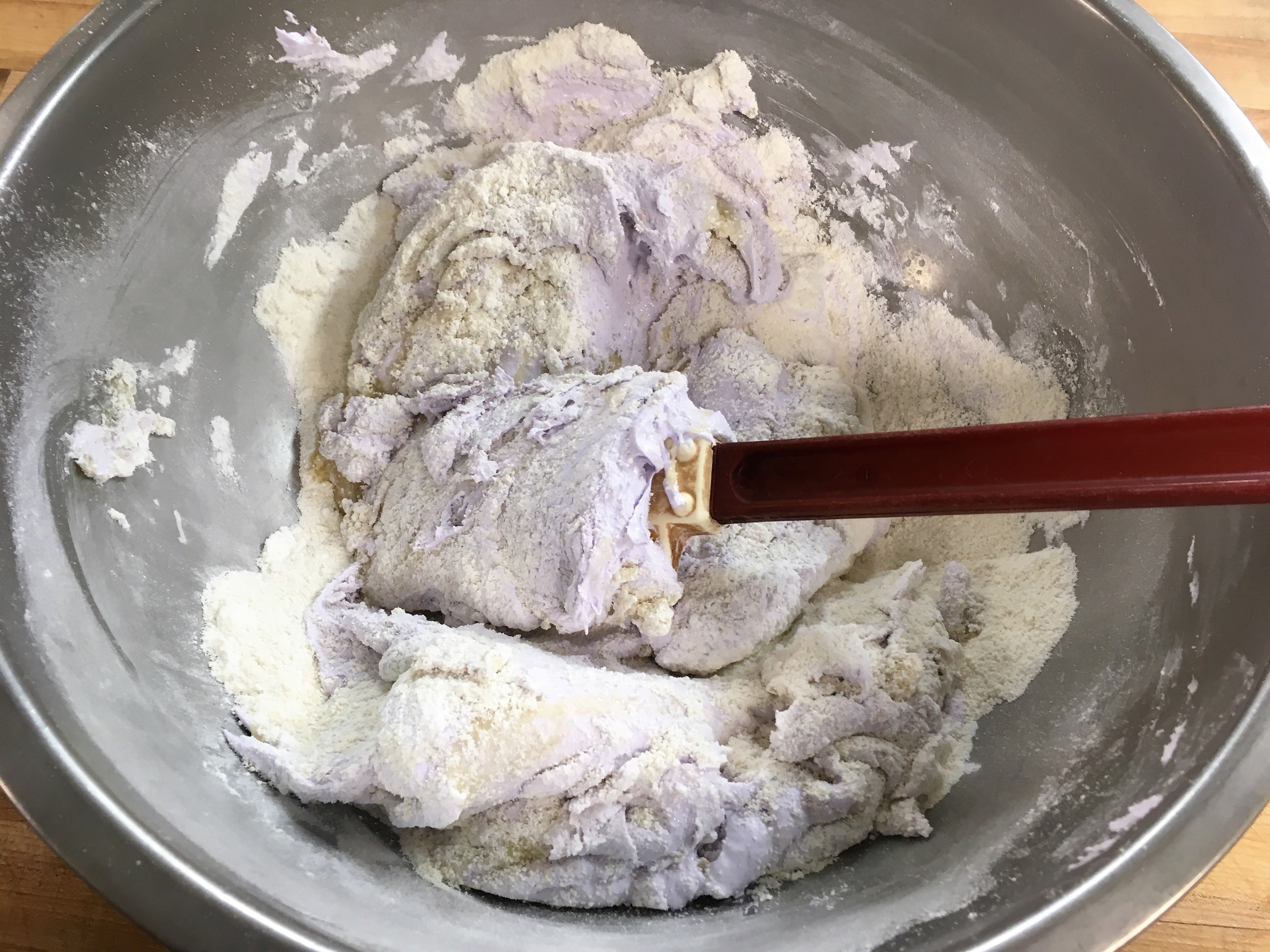 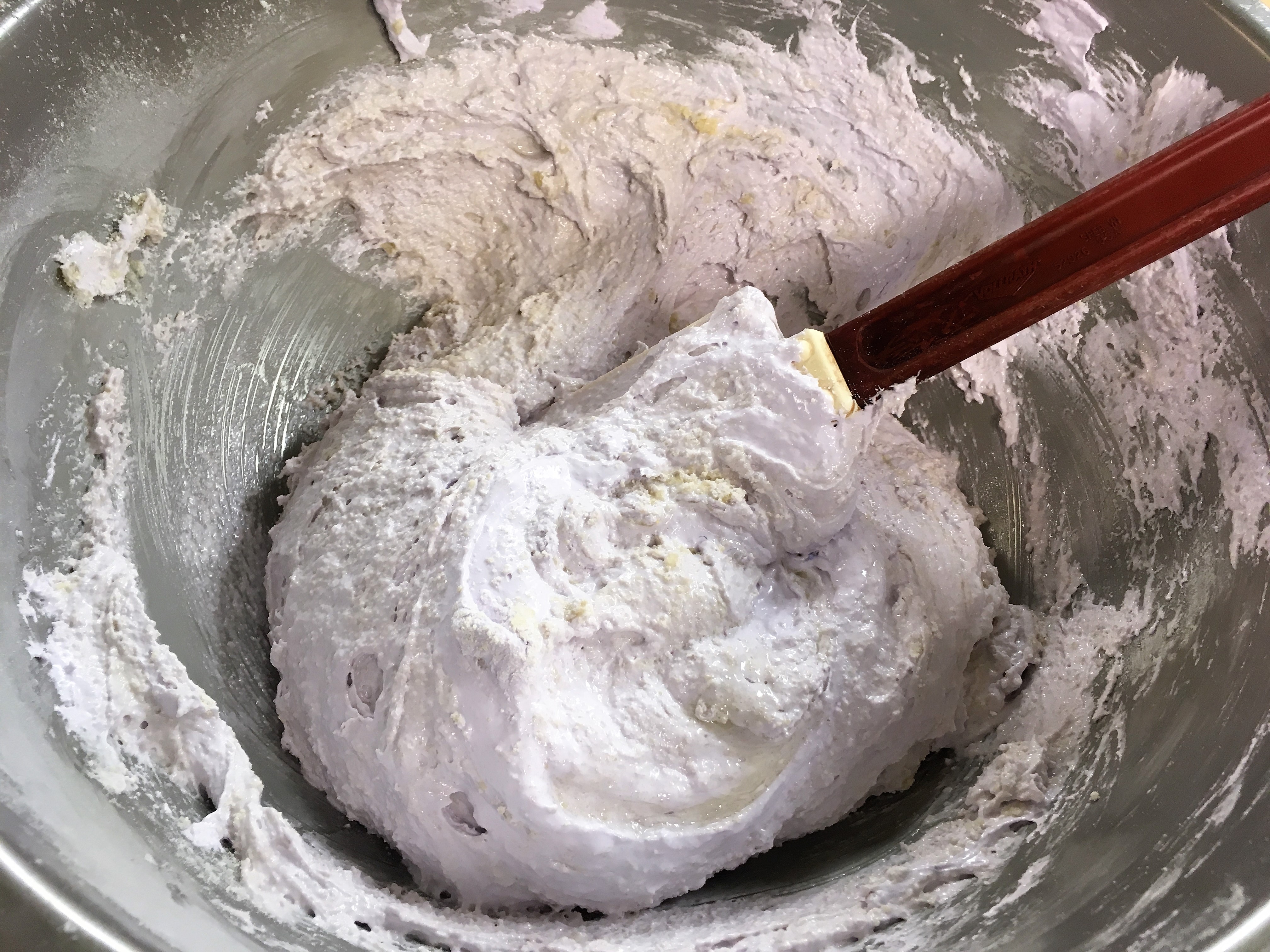 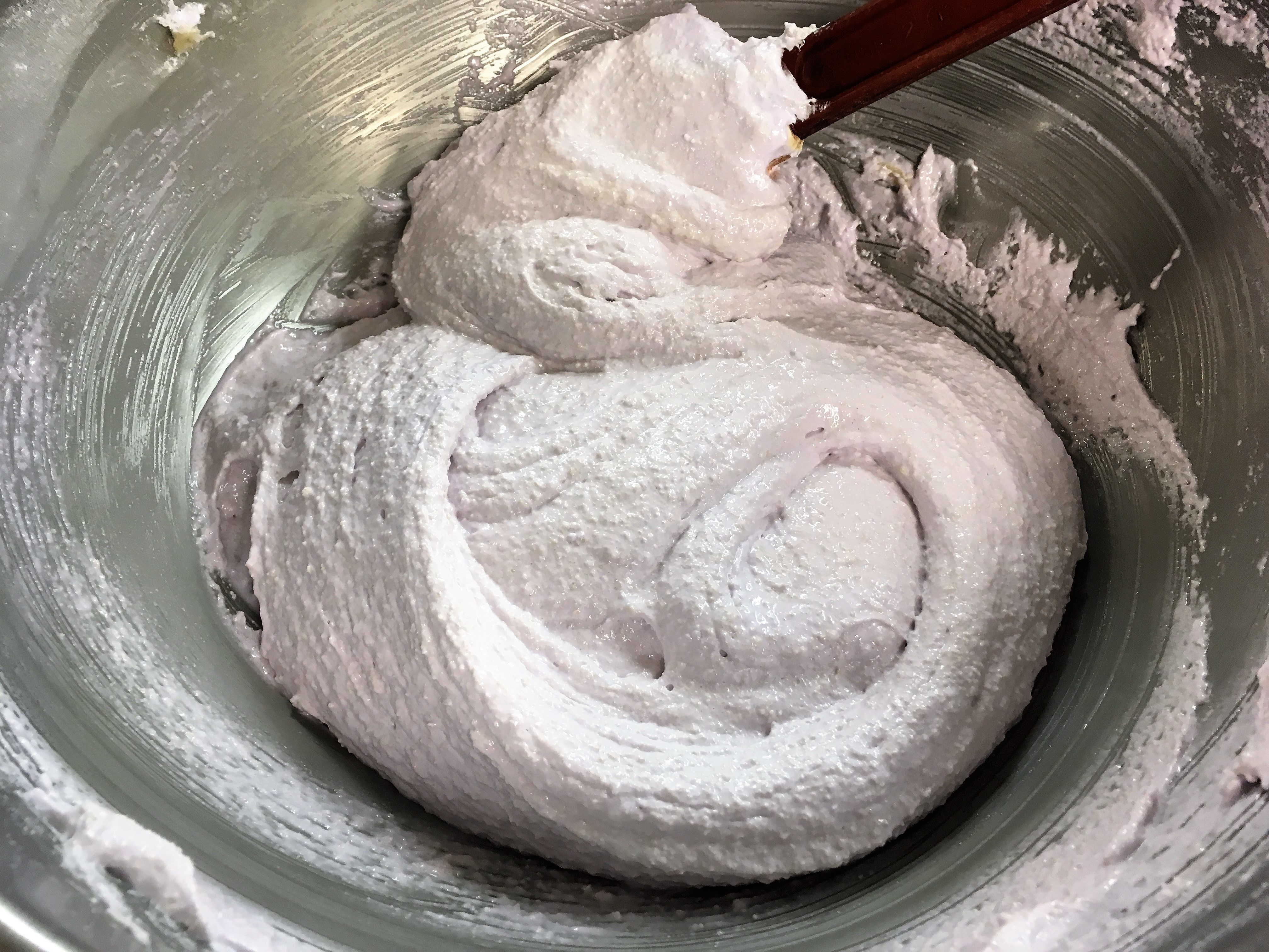 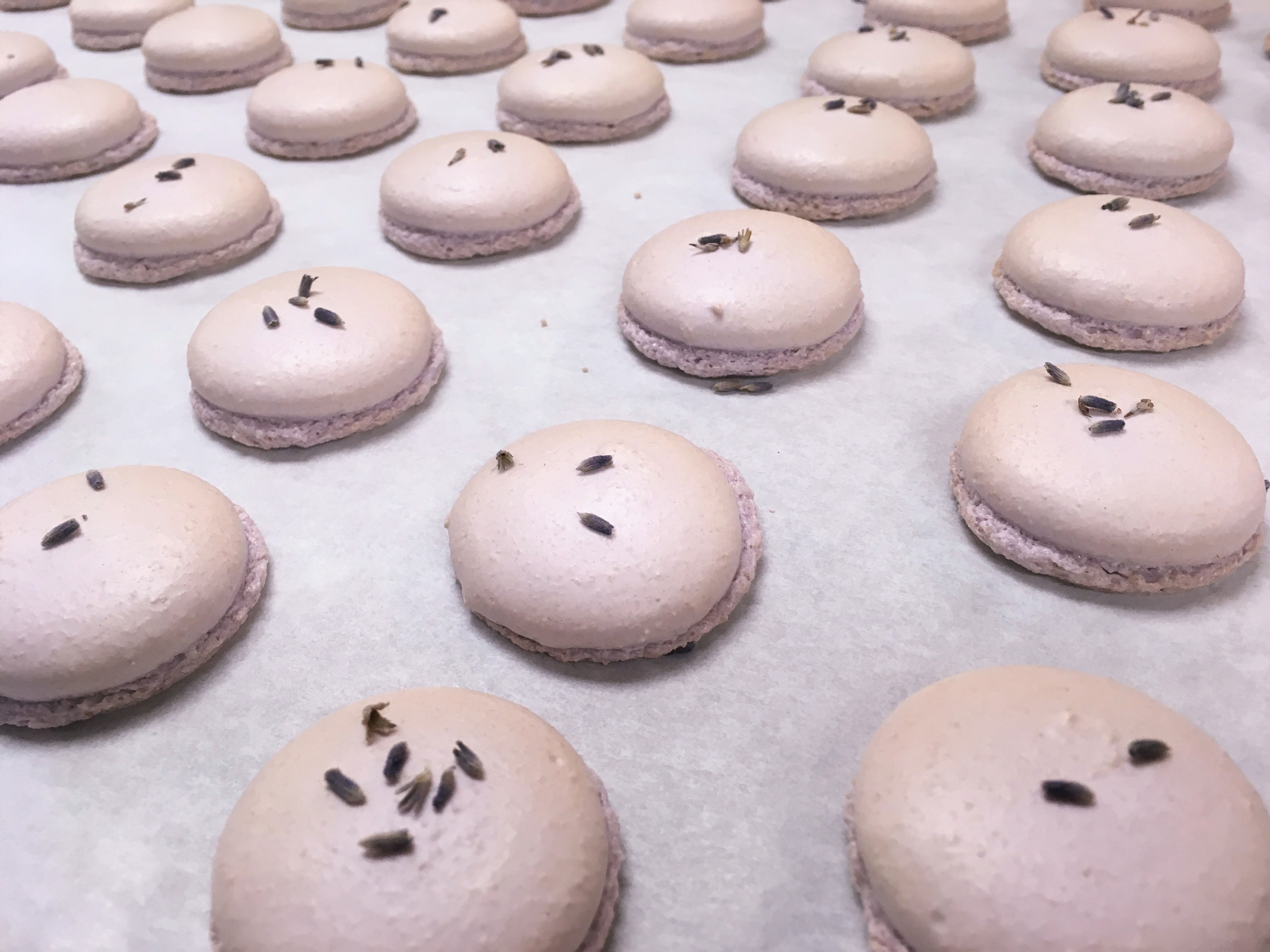 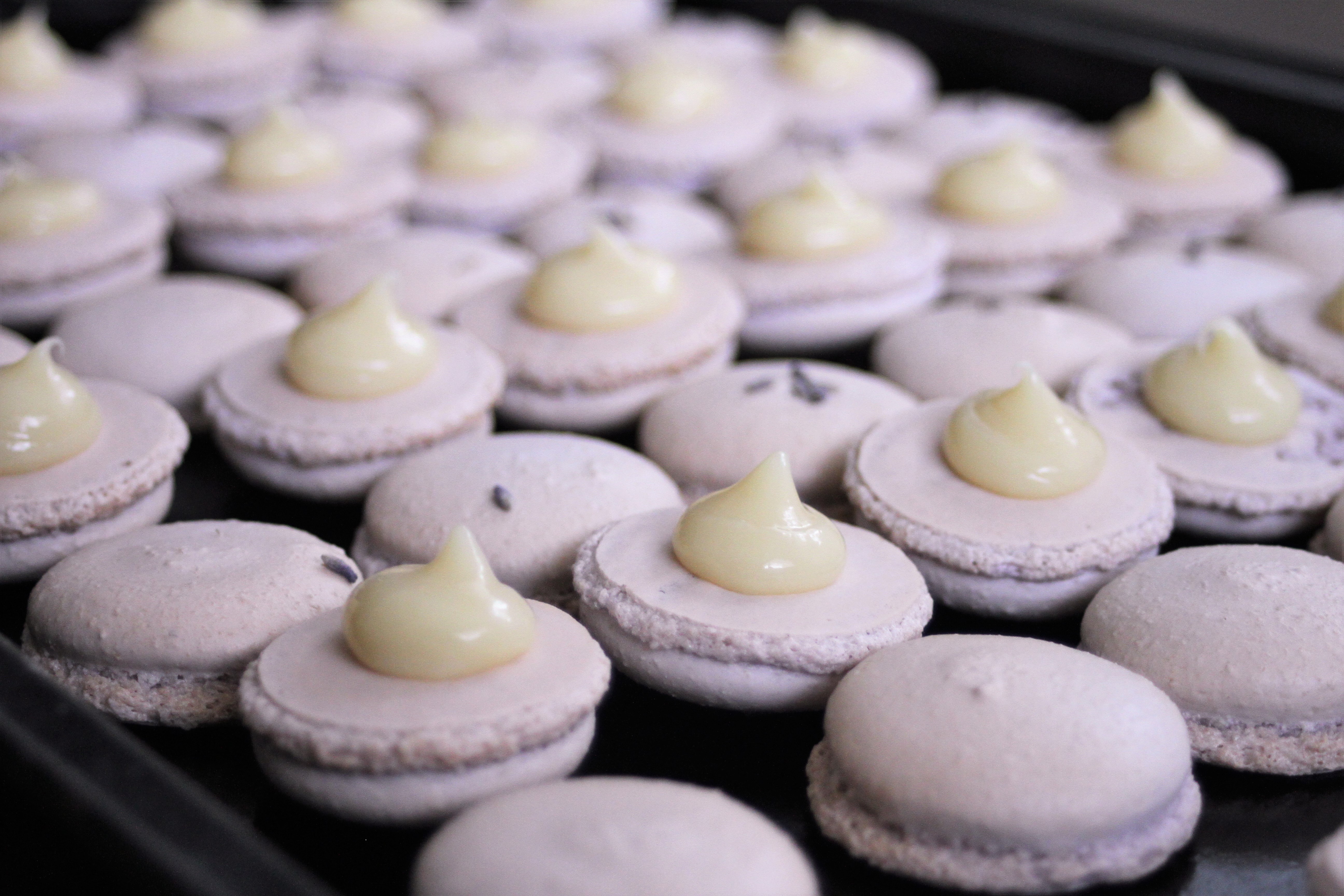 Lavender White Chocolate Macarons
Yield about 50 macarons (100 shells)
Almond Flour 300 g
Powdered sugar 300 g
Egg whites 110 g
Egg whites 110 g
Sugar 300 g
Water 75 g
White Chocolate Lavender Ganache
Cream 200 g
Lavender 2 tsp
Corn Syrup 40 g
White chocolate 200 g
Directions:
Preheat oven to 350 degrees F.
Sift almond flour and powdered sugar together. Weigh out your whites and just pour them over top of the sifted mixture. Do not mix.
Place second amount of whites in a mixer fitted with a paddle attachment.
In a small saucepan, combine sugar and water, do not mix. Heat on high, and attach a candy thermometer to the pot.
Prepare two sheet trays by lining them with parchment paper. Prepare a piping bag with a small round tip.
When your sugar mixture reaches 235 degrees F, turn your mixer on high speed. As soon as your sugar mixture reaches 244 degrees F, remove from heat, slow the mixer speed down to low, and slowly stream in the sugar syrup on the side of the mixing bowl into the whites. Once all the syrup is poured in, turn the mixer back to a medium high speed and whip until you reach stiff peaks. Once at stiff peaks, you can add a drop or two of your desired color.
Fold the meringue mixture into the bowl with the almond flour mixture. Slowly and delicately fold until you’ve got no dry parts left. You want to use a rubber spatula to do this folding. You want the mixture to be running at a steady state but not too runny.
Transfer to piping bag and pipe at a 90 degree angle (straight up and down!). Pipe disks about the size of a quarter until you have no batter left.
Gently tap the sheet tray straight up and down so you can tap out whatever air bubbles may be trapped within the batter.
Immediately bake for 10 minutes, opening the oven door half way through to let any humidity escape.
Let cool.
To make the filling, steep lavender in cream in a small sauce pan. Steep for 15 minutes. Strain out the lavender and return cream back to pot. Heat until right before boiling, then pour over white chocolate/corn syrup mixture. Whisk until smooth.
Let ganache cool for 1-2 hours.
To fill macarons, align macaron next to each-other, pipe ganache on one side and top with corresponding side. Chill in the fridge overnight. Macarons will have the best texture after the filling has been set for 24 hours.
Enjoy! 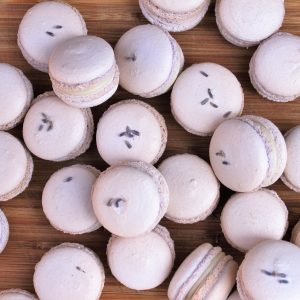 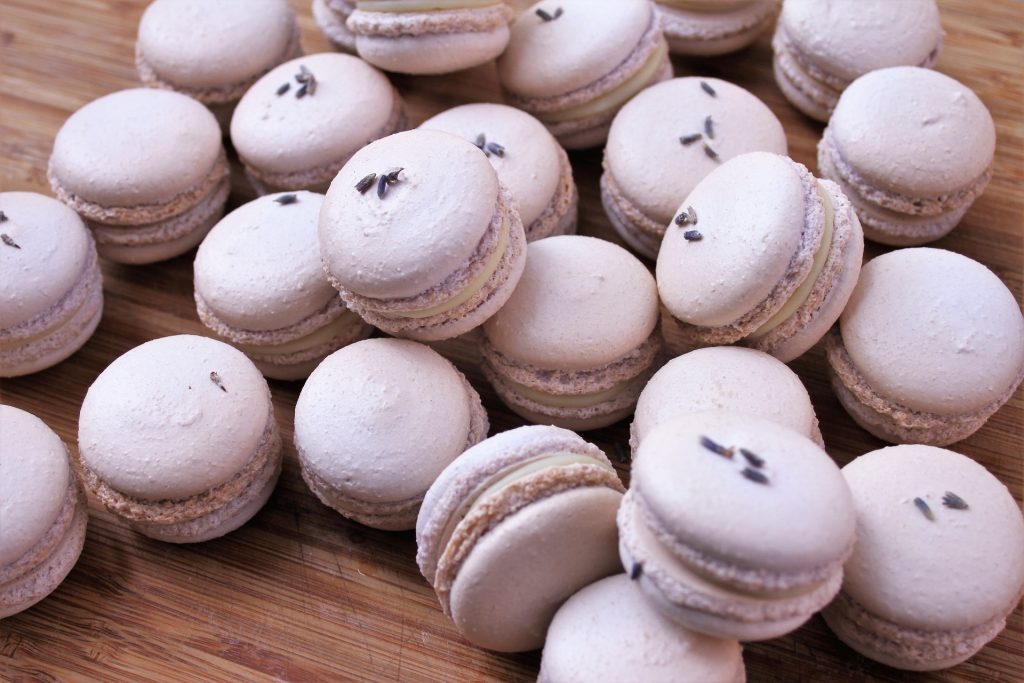