Happy 2020 to all of you lovely people! I can’t believe we’re in a new decade. Time sure flies by. I hope everyone had a wonderful and safe New Years! I was able to take a few days off work and go back home to California and spend some time with my dad. Unfortunately, I caught some sort of stomach bug so it was not the most amazing trip, but still good. They say if you don’t think about work while your on vacation then it’s a good vacation right? Well I didn’t. And now that I’m home and we’re getting back into the groove of things I feel super inspired and ready to take this year on! So pumped to see what is in store for this year (and decade!).

This Cinnamon Wreath is kind of a mix between babka and cinnamon rolls. I wanted to share this recipe because it’s a Celebratory type of bread, which is, in my opinion, so fitting for the new year! You can make this bread for any celebration though, and being that it’s the perfect pull-apart shape, it’s great for a crowd. I put a little cocoa powder in the cinnamon filling to deepen the cinnamon flavor- it’s not going to taste like chocolate, just enhance the cinnamon flavor.

While recipe testing this baby – we found out that our dog really loves the smell of cinnamon. He would not leave the kitchen even when we were out out of the house! Through the lens of our doggy cam we could still see him laying in the kitchen smelling in the cinnamon aroma. It was priceless. 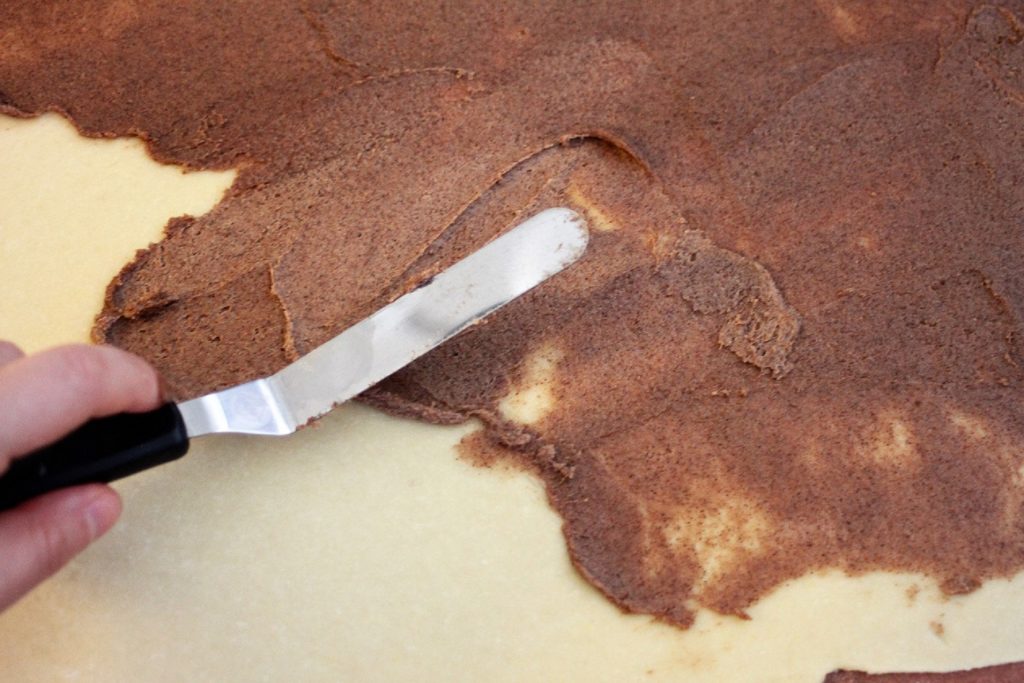 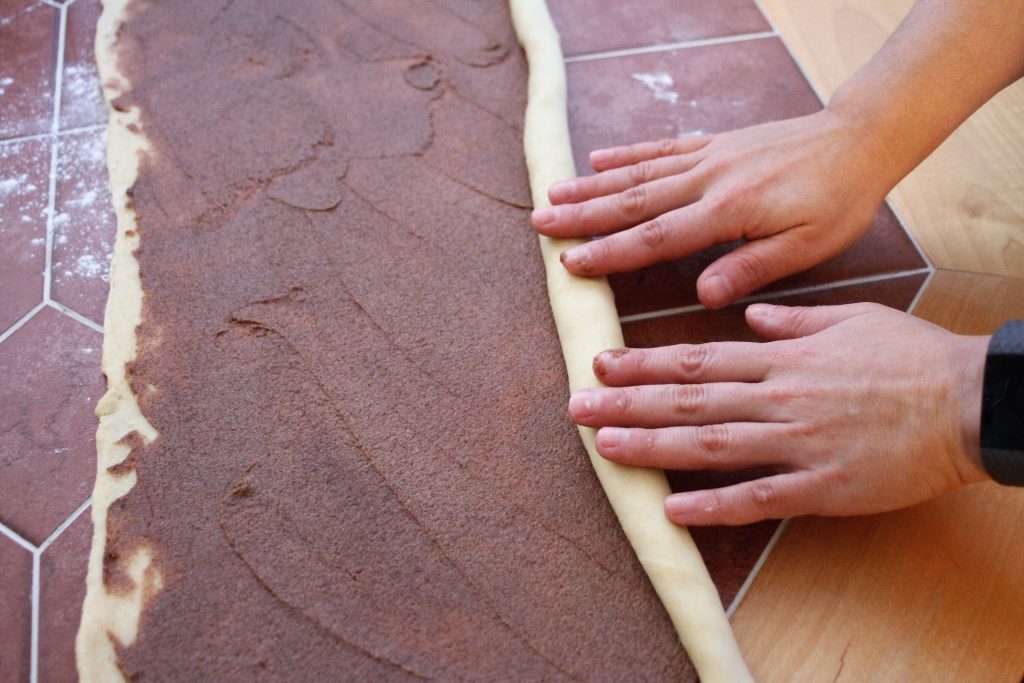 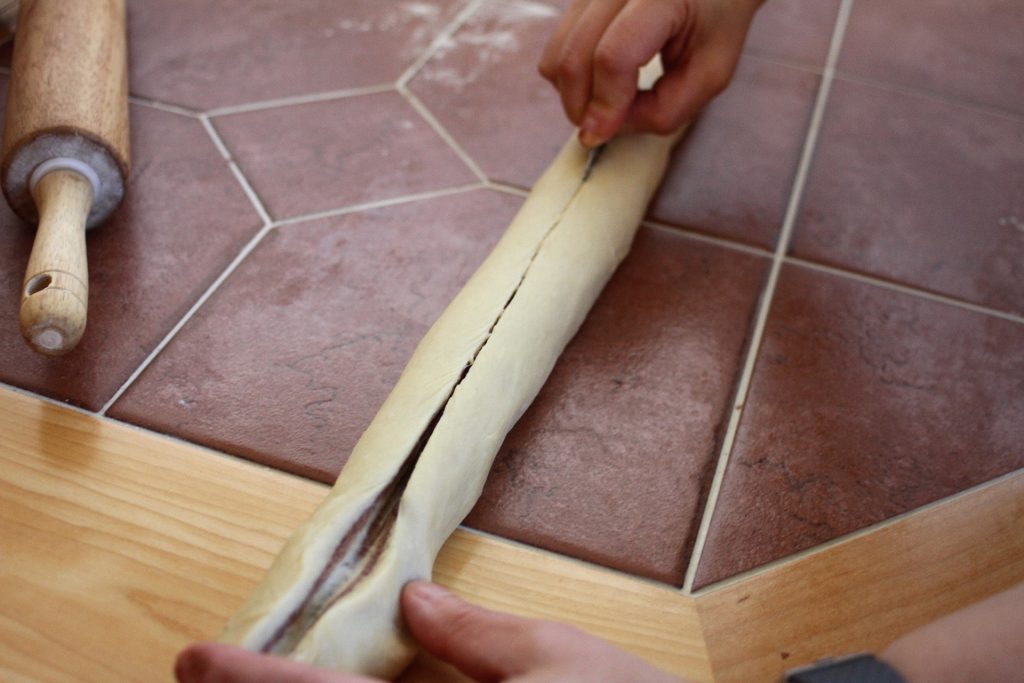 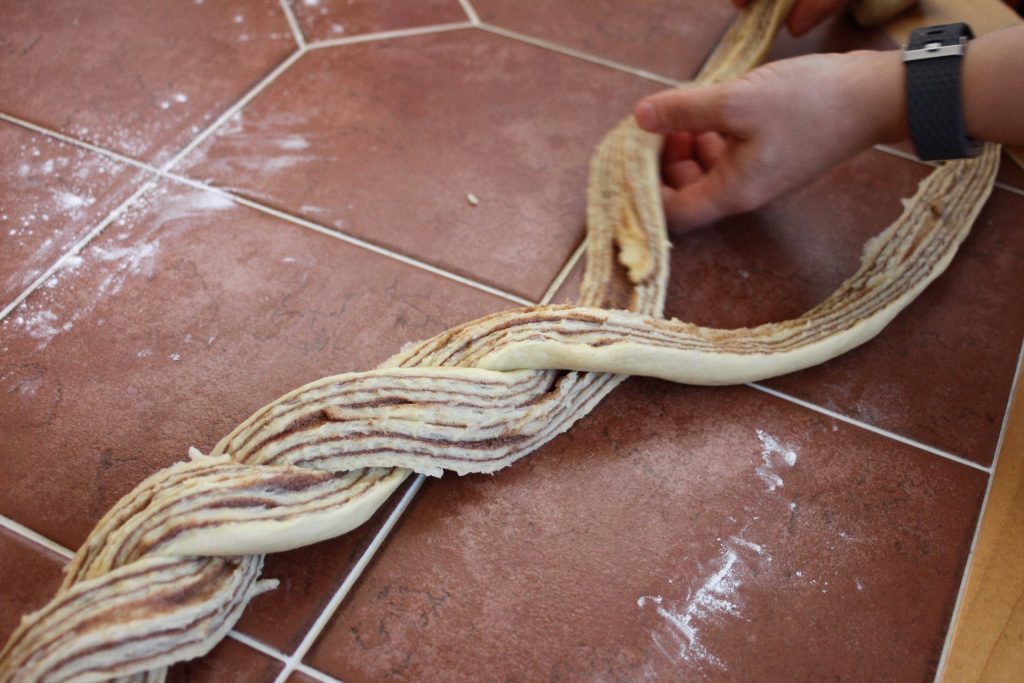 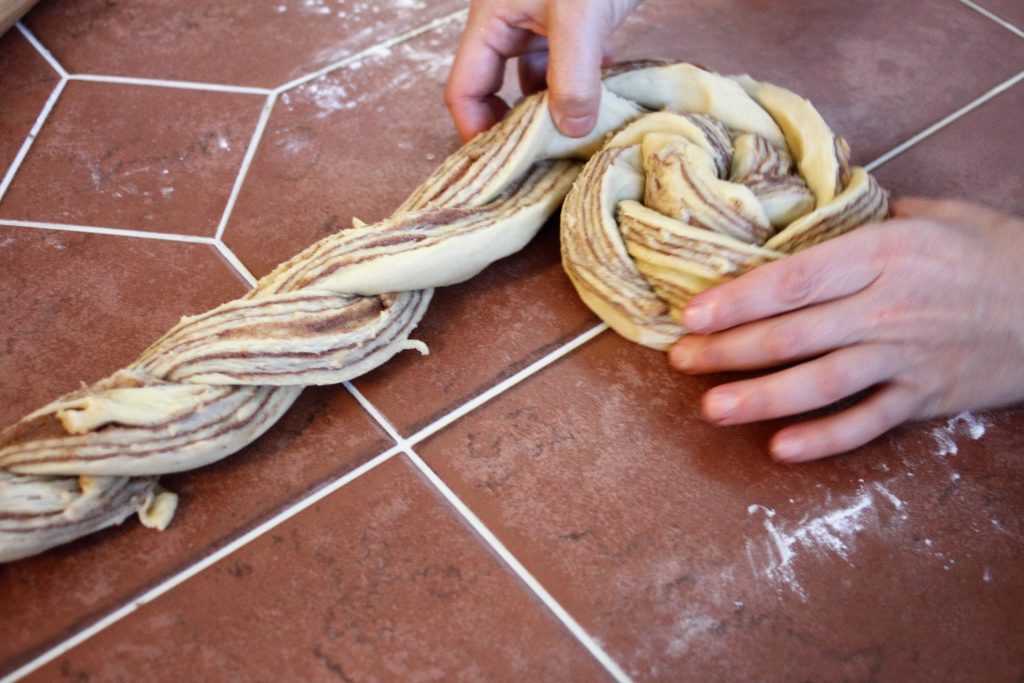 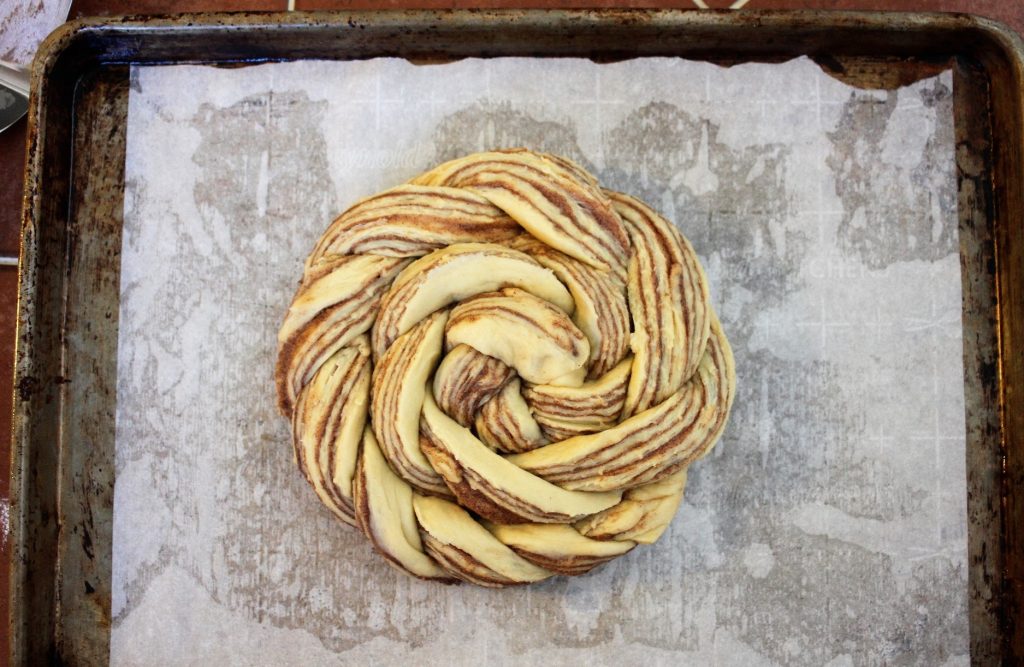 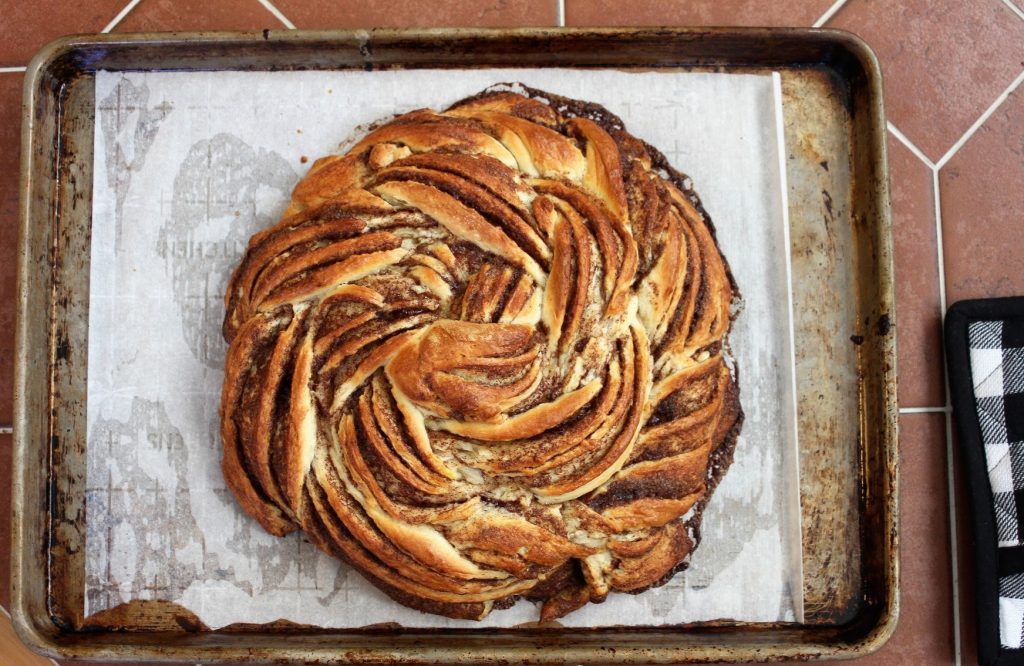 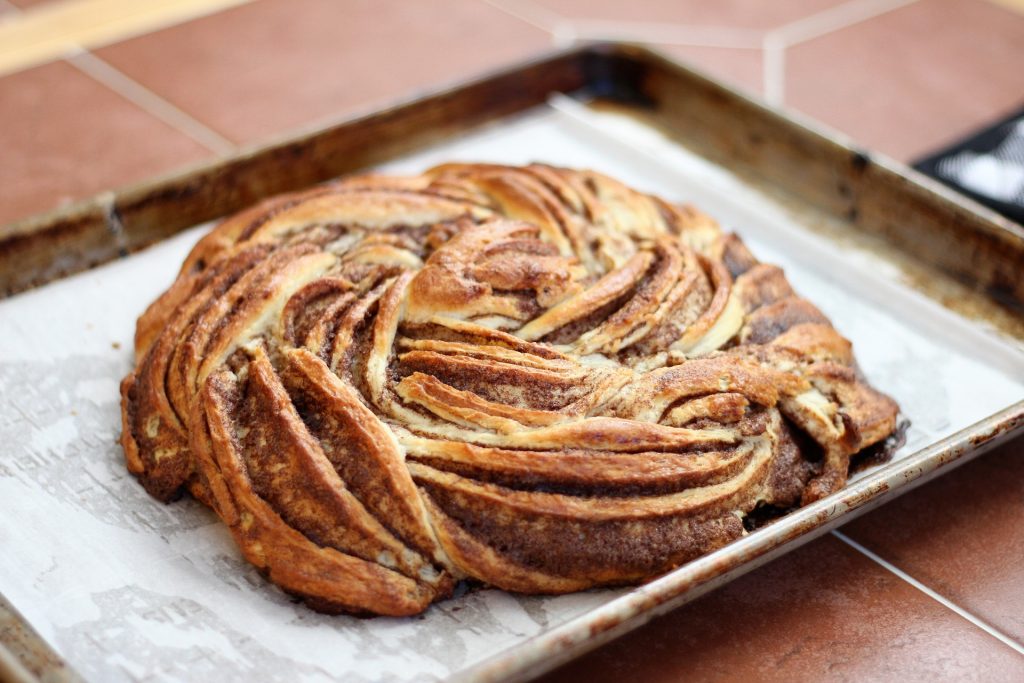 Sprinkle yeast over luke warm milk, add a pinch of sugar, and set aside for 5 minutes, or until yeast mixture is bubbly and frothy.

In a mixing bowl fitted with a paddle attachment, add flour, remaining sugar, salt and turn on low just to mix ingredients together. Add yeast mixture and mix for 1 minute. Now switch to a dough hook.  Add eggs, then butter, and mix on low for 5-7 minutes. Dough should be in one ball going round and round the bowl before taking out. Put the dough into a greased bowl, and cover it. Leave in a warm, non-windy area of your kitchen, and let proof for 45 minutes.

Prepare the filling next.

Once dough is proofed, turn out onto a lightly floured surface and roll with a rolling pin. Roll it into a rectangle that’s about 10”x26” wide. Using an offset spatula, spread cinnamon filling over dough. Leave ½” clean on all edges.

Starting from the bottom, roll the dough up tightly. Once rolled up, lengthen the roll a little by pulling each side longer.

Cut dough down the center of the roll, exposing the filling. I use a razor blade to cut my way through. Next, wrap the two pieces together tightly, then roll it into a large cinnamon roll shape. Use a large spatula to transfer the dough to a sheet tray lined with parchment paper.

Cover and proof for 1 hour.

Mix water and egg together to make your egg wash. Lightly spread the wash over the surface of the proofed dough.

Bake for 25-30 minutes. The wreath will be evenly golden brown. Cool completely before cutting. 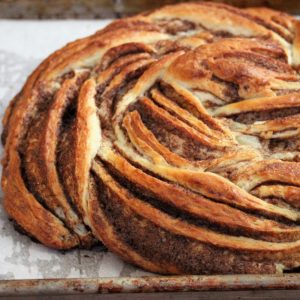